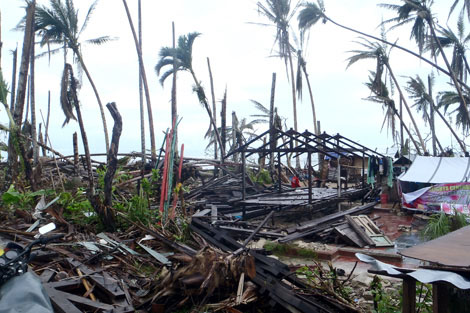 Destruction left behind in Davao Oriental Province along the eastern coast after Super Typhoon Bopha struck at the beginning of December 2012.

As ShelterBox relief efforts continue in Compostela Valley on Mindanao island, Philippines, another Response Team has been assessing the need along the isolated picturesque eastern coastal regions of Cateel and Baganga.

Typhoon Bopha, known locally as Pablo, made landfall on the South Filipino island late at night on 4 December 2012. The eye of the storm struck the eastern coast causing widespread loss of life and destruction in Davao Oriental Province. In Baganga alone, 19,500 families lost their homes and 172 people lost their lives.

‘Never before have I seen such devastation caused by natural disaster,’ said ShelterBox Response Team (SRT) member Sharon Donald (UK) who has been working alongside Bruce Heller (US) in the region meeting the local people and assessing the need for emergency shelter.