Almost four months have passed since Typhoon Bopha carved a path of destruction through the Philippines leaving thousands of families in desperate need of emergency shelter.

An in-country ShelterBox Response Team (SRT) was mobilised immediately to assess the need. They found the worst affected areas to be on Mindanao Island in Compostela Valley and the more isolated coastal Davao Oriental province. 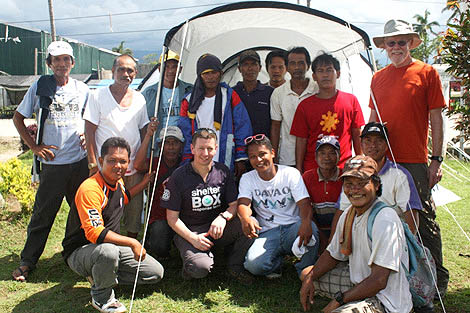 ShelterBox has trained teams from Plan International in putting up disaster relief tents, enabling them to continue with distributions, bringing shelter, warmth and protection to hundreds of typhoon survivors like Analyn Cabiling, who was seven months pregnant when she lost her home in the storm.

‘When we met the Cabiling family, they had been living in an extremely small old hut with large holes in the roof, which did not keep out nightly rain storms,’ said SRT member Des O’Connell (UK). ‘Finding shelter was a huge concern for Analyn, her husband Raymond, and their two children both under seven years of age, as they needed to start buying materials to rebuild their flattened house. Therefore providing them with a tent has helped them make the next steps in their recovery.’

When the eldest son returned from school, he said: ‘Wow! Now we have a beautiful home. We are happy and we are so grateful to ShelterBox, Rotary and Plan International in providing us with support and shelter.’

The huge scale of destruction caused delays in land clearance, as well as further flooding, which slowed shelter distributions. However, since the disaster, SRTs have been distributing much-needed emergency shelter to families in need, in partnership with aid agency Plan International.

‘We have worked with ShelterBox before and we know that ShelterBox do as they promote and responded to help the Philippines without any hesitation,’ said Plan International Coordinator Roy Soledad.