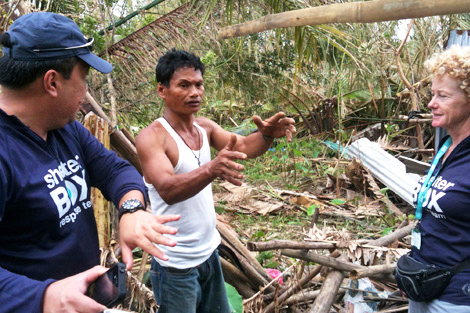 Typhoon Utor wreaked havoc in Luzon, one of the largest Philippine islands, two weeks ago. The storm has not only displaced thousands of people but also damaged infrastructure including hospitals, affecting much needed medical services, particularly in the Aurora Province where ShelterBox has been assessing the needs of the communities.
‘The hospital’s roof was completely blown off on the night the storm hit,’ said Dr. Nelia Diesta, the assistant hospital administrator in Casiguran municipality hospital. ‘We were forced to move patients to the small area of the hospital that remained intact which has meant that many patients are being made to stay outside under some tarpaulin. Patients are also being seen to slowly due to the lack of space.’
The hospital is already relatively small and serves four municipalities, it cannot close. Furthermore, rebuilding efforts are likely to take months to make the building safe again. Therefore a few ShelterBox tents that were already prepositioned in the country are being used to accommodate patients.

‘Lacerations’
‘There has been an influx of patients since the storm as it inflicted injuries, like lacerations, upon people,’ said ShelterBox Response Team (SRT) member Liz Odell (UK). ‘Setting up the tents here enables more patients to be seen per day quickly and gives them a clean private space to recover. It’s the only hospital for 100 miles and therefore a vital contribution to the communities’ wellbeing.’
The SRT continues with assessments in and around the capital city of Manila as heavy rains continue.
‘Even being from the Philippines, I have never seen such poverty and isolation,’ said SRT member Abner Tayco (PH). ‘Typhoon Utor has had a particularly destructive impact on the region as it was the strongest to hit in many years.’
You can help families affected by disaster by DONATING HERE. Thank you