Kara Tepe Camp on a hillside outside the main port of Mytilene. ©Rachel Harvey, ShelterBox

As Greece buckles under its own economic pressures, it is also under stress from a growing external pressure. Every day boatloads of migrants and refugees fleeing conflict in Syria and Afghanistan arrive from Turkey on islands such as Lesbos. ShelterBox is sending tents to help in overwhelmed transit camps.

It is a short three mile sea journey from the coast of Turkey to the island of Lesbos. But this proximity has made it a stepping stone on a journey of despair. Some days as many as 2,000 migrants arrive in small vessels on the island’s northern beaches. Most are fleeing war in Syria and Afghanistan, with hopes of heading further into Western Europe.

For these families any sense of relief at finally setting foot on European soil is soon crushed by a stark reality. Transit camps on Lesbos and its neighbouring Aegean islands are now overwhelmed, many becoming squalid. Greece, absorbed with its own problems, is ill-equipped to deal with this influx. Its government is nearly broke, local services – where they exist – are struggling, and one person in every four is unemployed.

Lesbos, third largest of the Greek islands, is still a popular tourist destination. It has only 86,000 residents. But although up to 3,000 holidaymakers a month fly into Mytilene Airport, that traffic is now eclipsed by seaborne migrant arrivals that exceeded 107,000 last month. The UN says that more migrants landed on the island in June than in the whole of the previous year. 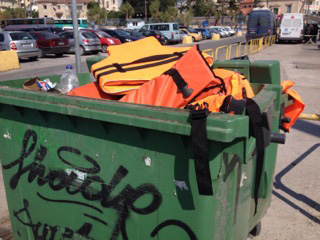 Disgarded lifejackets in a bin on the island of Lesbos

On Lesbos, as on nearby Kos, residents and tourists are doing what they can to help, many providing clothing or food. But occasionally tempers run high. Last week migrants on Kos clashed with police in the long, hot queues to obtain registration papers. Migration from Turkey into Greece is now on a larger scale than to the southern Italian islands from Tunisia, or to mainland Spain from Morocco at the mouth of the Mediterranean. It is only the closeness of the Aegean islands to Turkey’s coast that has prevented multiple sea tragedies, most making it to shore on flimsy rubber dinghies provided by people-traffickers, with instructions to  slash them on arrival so they can’t be used again.

International disaster relief charity ShelterBox has had a team on Lesbos island over recent weeks assessing needs and talking to local officials about how it can help. Now, later this week, a second team will return to oversee the distribution of 100 tents across the islands, with 70 of these allocated to Lesbos. Here they will be allocated to create a new site, and to ease pressures on the existing camps. But ShelterBox is also looking to neighbouring islands.

Response team volunteer Rachel Harvey was part of the original ShelterBox team, and gives this eyewitness reaction. ‘The situation on Lesbos is unlike most other humanitarian crises in that the population needing help is transitory, only staying for as long as it takes to get the necessary papers allowing onward travel.’ 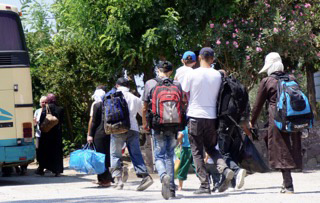 More than 107,000 migrants arrived on Lesbos ls June, more than the previous 12 months put together

‘Hundreds of people, sometimes thousands, arrive on the island in overfull dinghies every day. They are exhausted, often traumatised by recent experiences, and frequently confused about what to do next. Very few want to remain in Greece – Lesbos is simply the geographic gateway to the EU. But while they wait they need somewhere safe to stay. The authorities on Lesbos are doing what they can, but by its own admission the local municipality is ill-equipped to manage a crisis on this scale.’

‘Conditions in the two main reception camps have improved – thanks to the efforts of international agencies working with local officials. But the existing tents, provided by Lesbos’s Civilian Protection Force, weren’t designed for constant use over a period of months, and have fallen into disrepair. Ground sheets are soiled, guy ropes knotted and frayed, fly sheets torn.  Some people arrive too late to get a space inside even these meagre shelters, and end up sleeping out in the open. People are visibly shocked by the situation in which they find themselves. One asked me for more bin bags so that he could try to collect some of the festering rubbish that keeps piling up in the corners of the overcrowded camp.’

ShelterBox CEO Alison Wallace says, ‘What a desperate situation, both for the travel-weary migrant families, and for their reluctant hosts. Even if systems were in good shape, it is hard to see how Greek officials could process the numbers that keep arriving every day, and provide shelter and basic provisions for an unforeseeable number of people. Whatever pressures or fears have brought them to these shores, and wherever they are bound next, we will make sure as many as possible get some respite in our tents and from our colleague charities.’