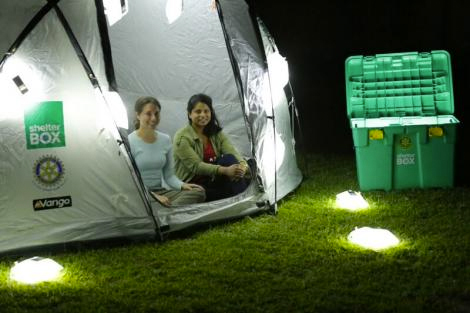 ShelterBox was one of the earliest backers of luminAID, an innovative solar light that is proving an essential aid item in disaster zones. Its inventors, Anna Stork and Andrea Sreshta, travelled to Malawi with ShelterBox to see luminAID being used by flood victims, in a feature shown by ABC TV to its US viewers.

ShelterBox delivers aid all over the world, and occasionally radio and TV stations connect with its Response Teams, and newspapers and photojournalists cover its work in disasters and conflicts.

But rarely does ShelterBox have a shop window to an audience of 7.5 million. This happened last Friday on America’s ABC programme ‘Shark Tank’.

Architecture and engineering design graduates Andrea Sreshta and Anna Stork first appeared on ‘Shark Tank’ in early 2015 seeking backing for their compact, waterproof solar-powered light named luminAID. The product was an instant hit, and with five offers on the table (a rare event on the Emmy award-winning programme) Andrea and Anna eventually cut a valuable deal with sports, movie and cable TV mogul, billionaire Mark Cuban.

As early as 2011 ShelterBox had spotted luminAID’s potential in disaster areas where power lines have gone down. Impressed with its weight, size and durability, the charity became an early investor, including the LED lights in its standard ShelterBox contents. 50 luminAID packages can fit into the same space that eight torches would occupy. Its unique inflatable diffuser makes it ideal in wet conditions such as floods and storms.

At the end of last year ‘Shark Tank’ broadcasters ABC were in contact with Alan Monroe of ShelterBox USA, interested in filming Andrea and Anna on deployment with ShelterBox. Arrangements were made for them to travel to Malawi – the scene of massive floods in 2015 with hundreds of thousands of families displaced – to see LuminAID in action, lightening the darkness for people who had lost all their possessions to floodwaters.

Alan Monroe hosted the deployment and ShelterBox videographer Liv Williams filmed the Malawi sequences within the episode, allowing us to produce broadcast quality footage in-house and on deployment for the the ABC network. It produced a very moving piece, with warm welcomes from smiling beneficiaries.

Rob Mills, ABC Television’s Senior Vice President of Alternative Series, Specials & Late Night, says, ‘Shark Tank thrives on discovering and supporting innovative businesses and products. It was a privilege to follow luminAID into the field and see it being used as part of an aid package by ShelterBox to help victims of flooding in Malawi, Africa. It is always good when there is a link between invention, investment and improving the lives of people in need.’

luminAID is a multi-award winner, including the 2013 Clean Energy Challenge, the 2014 Toyota ‘Mothers of Invention’, and a prize at the Chicago Innovation Awards. Last summer it was also featured in a White House showcase for technological and scientific achievements hosted by President Obama.

ShelterBox CEO Alison Wallace says, ‘ShelterBox continually scans the market for products that will help families overwhelmed by disaster. luminAID is a very clever product, and we are pleased to have been among its earliest backers. I’m not at all surprised that Anna and Andrea won support on American Dragon’s Den, and we’ll be watching these young inventors to see what they come up with next.’