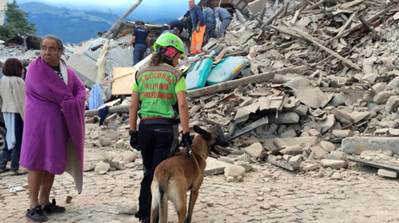 A severe earthquake at 1:36 am GMT struck south-east of the Italian city of Perugia last night, killing at least 21, with an unknown number trapped beneath rubble in several villages. This was a shallow quake in a mountainous area, with tremors felt as far away as Rome

International disaster relief agency ShelterBox, based in the UK but with an affiliate organisation in Milan, is sending a team within 24 hours to the remote mountainous area of Italy that suffered a major quake and a series of tremors during last night.

ShelterBox Operations Co-ordinaror Phil Duloy is heading up initial assessment work, and is now making contact with local and government officials in Italy, with ShelterBox’s Rotary and affiliate colleagues, and with partner disaster relief organisations including the Red Cross.

If emergency or temporary shelter is needed for families and individuals made homeless in the disaster, ShelterBox has adequate supplies of tents and other equipment standing by in the UK and at other sites across Europe.

In recent years ShelterBox has deployed to Italian earthquakes twice. In 2012 it supplied 132 tents following a 6.0 quake, and in 2009 in Abruzzo when over 300 people died in a 6.3 quake the charity deployed 294 ShelterBoxes.

Early morning with frost still on the ground, local volunteers from Assergi, a small mountain village North of Rome, erect Shelterbox tents. The villagers are too scared of further quakes to sleep in their homes and many have spent their second, cold night in their cars. ©Mike Greenslade/ShelterBox 2009

You can help ShelterBox’s disaster relief efforts in Italy and elsewhere by donating to the ‘ShelterBox Solution’ here: PLEASE DONATE