In October 2019, three powerful earthquakes shook Mindanao Island in the Philippines, damaging and destroying buildings. Thousands of people were forced to leave their homes, staying in evacuation centres or with host families. Those who had been hit the hardest stayed in makeshift shelters and were not expected to return home for up to six months. 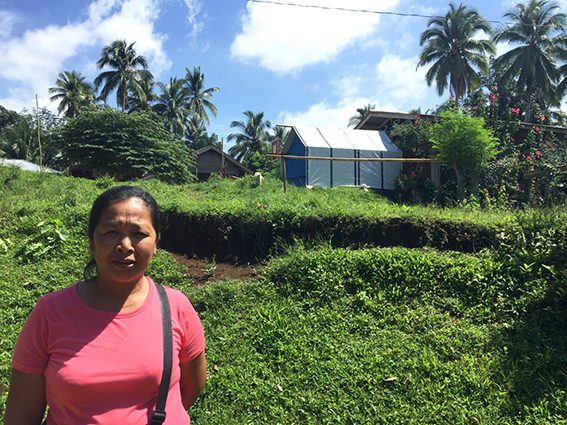 Veronica lives at the very top of a mountainous barangay in Mindanao. Along with her family, she was one of the thousands of people affected by the earthquakes. Speaking to the ShelterBox team when they returned to Mindanao to do post-distribution monitoring in December 2019, Veronica said she is proud of where she lives. She added that it is very beautiful with two rivers flowing either side of her home and lots of colourful flowers surrounding it.

The team were unable to get to see her homesite as it was still unsafe for vehicles other than motorbikes to get up there. Fortunately, Veronica’s husband Rodolfo was able to go to up on his motorbike and capture some images of their home that had been rebuilt using ShelterBox tools and tarpaulin.

Veronica told the team she was in her home when the earthquake, which measured 6.6 magnitude, hit on the 29th of October at 9am. She first felt the shaking and then cement started to fall from the ceilings and from the walls. She instantly ran outside until the initial shaking stopped. Her priority was then to run to the school further down the hill to go and see how her youngest daughter was. “I was so scared not knowing how the earthquake had hit the school,” she said. “I ran as fast as I could to get there.”

The school had been severely damaged with parts of it collapsing. The teachers left to go home and see if their families were OK, and what might have happened to their homes.

“Many of us here thought that as Christmas was near, no more earthquakes would hit us,” said Veronica.

At the time of the earthquake Rodolfo was working on their farm. The farm was badly affected, and a large crack appeared through the land. Fortunately, he was able to return to the family unharmed.

“Our house was unsafe to live in,” Veronica explained. “Two walls had collapsed, and the aftershocks meant that cement kept falling from the ceiling.” After the earthquake, the only form of shelter the family had was one tarpaulin. To ensure the whole family was protected from the weather they had to borrow another tarpaulin from Veronica’s brother. This meant they were living in cramped conditions.

Two weeks after the earthquakes hit, the family received aid items from ShelterBox. This included a shelter kit with two tarpaulins, two solar lights, two blankets and a bag to put everything in. They used these items to build a new shelter close to their damaged home until it was safe to return. 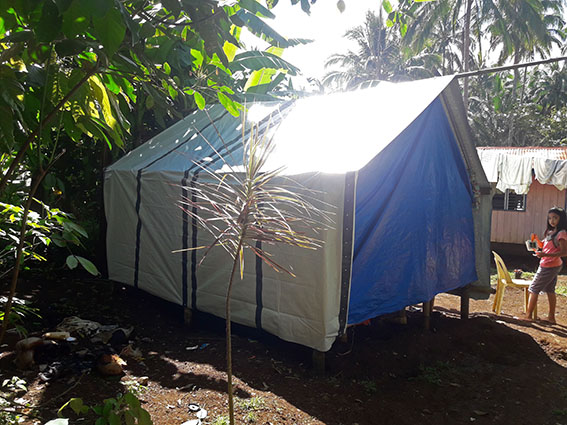 “We are so grateful for the ShelterBox tarpaulins as they are so much better than the ones we had,” said Veronica. “We feel that come rain or shine we are able to feel comfortable inside the home we have made with them and as a result we are now sleeping better.”

Despite the hot weather the tarpaulins keep her family cooler in the day. Veronica said that all the community members at the top of the barangay had used their aid items. Their community does have electricity, but they experience frequent black outs, so the solar lights are used a lot. In case of another earthquake, Veronica said she has prepared a grab bag for the family to take: “We used the bag to carry items back from the distribution, but now we store emergency clothing and other important items in it, just in case another earthquake happens, and we have to leave the area quickly.”

They are not too sure what the future holds for them as they cannot access the farm due to the risk of landslides. But now that they have somewhere to live, her husband is able to focus on looking for a temporary job until the farmland becomes safe or they find an alternative site.

Another great blog about our partnership with Rotary International …..

By Carla Sateriale, member of the Rotaract Clubs of Hampstead, Hendon and Golders Green in England and 2018-19 Communications Officer for Rotaract in Great Britain and Ireland 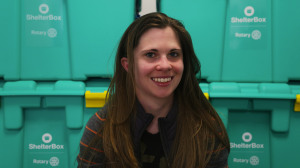 ShelterBox delivers boxes of aid in disaster zones, right? That’s what I used to think. Since I got involved in Rotaract in 2014, I’ve heard various people sing the praises of ShelterBox, as it is a popular charity for clubs to fundraise for. However, it was not until I was invited to attend the “Understanding ShelterBox Operations” (USOps) course in 2019 that I really started to appreciate what a truly remarkable organisation ShelterBox is. It’s about supporting people with the tools they need to recover. And getting shelter can be the start of so much more – it can bring families back together, be a place to share meals and restart studies or work.

So, thus began my journey. On a mild…

Here’s another great blog about Rotary and ShelterBox working together, featuring our very own Katelyn Winkworth ………

By James Bolton, Rotary in Great Britain and Ireland in collaboration with ShelterBox

Organizations such as Rotary and our project partners ShelterBox may have an adult profile, but the momentum is growing among a younger generation to create the next big humanitarian wave. ShelterBox had its origins in the Rotary movement 18 years ago, and now is Rotary’s project partner in disaster relief. Rotary members leave a lasting legacy on the lives of young people, with a number of programs and activities to support them in unlocking their potential. ShelterBox also provides young professionals an opportunity to make a lasting impact on communities.

‘Do it! I would encourage any young person to look further into this.’ That is the rallying cry from Katelyn Winkworth, a young Australian who trained as a ShelterBox Response Team Volunteer to help families caught up in war or natural disaster.

Katelyn shares her experience training to…

Great story here about ShelterBox and Rotary working in partnership ……..

Throughout August 2018, a series of earthquakes struck the Island of Lombok in Indonesia killing more than 460 people and displacing around 400,000. Rotarian Ace Robin, the current president of The Rotary Club of Mataram in Lombok discussed how her club could help affected families. Through pre-existing contacts in Indonesia, ShelterBox was put in touch with Ace.

Ace’s house was largely undamaged, but many of her friends’ and neighbors’ homes were destroyed. Ace and the Club of Mataram were instrumental in helping bring ShelterBoxes from Jakarta, liaising with heads of local communities to identify the most affected regions and distributing aid to families. Ace reflected that ”working with the ShelterBox Response Team taught us a…

Another great story about our partnership with Rotary International ……

By Rotary Service and Engagement

ShelterBox and Rotary International are Project Partners in Disaster Relief.  By working together, we are ensuring that no family is left without shelter after disaster.  Not only do Rotary and Rotaract clubs around the world support ShelterBox financially, but on many of ShelterBox’s deployments local Rotarians, Rotaractors and Response Teams work closely together at an operational level. Rotarians often have great connections with communities and authorities that can help response teams understand the situation and respond better together.

“Rotary has been involved in the creation of the…

Rotary and ShelterBox collaborate to provide emergency shelter and vital supplies to stabilize, protect, and support communities affected by disasters and other humanitarian crises. The ShelterBox Response Team trains under intense conditions to be prepared when it’s needed most.

In one example, two Rotarians and a Rotaractor faced one last challenge after a grueling year of preparation before they could join the elite ShelterBox Response Team.

There are many ways for Rotarians and Rotaractors to partner with ShelterBox. Gain inspiration from fellow members and contact ShelterBox to get involved.

Rotary and ShelterBox are project partners for immediate disaster relief around the world; ShelterBox is a registered charity, independent of Rotary and The Rotary Foundation.

The ShelterBox/Rotary partnership in practice ……..

Tropical Storm Urduja made landfall over San Policarpio in the Eastern Samar province of the Philippines during December 2017, dumping the equivalent of two months of rain in just 48 hours. Mudslides and flooding caused considerable damage in the hardest hit areas, with the Government reporting more than 30,000 homes destroyed.

The newly established ShelterBox Operations Philippines, created by working closely with local Rotary clubs,  swiftly delivered emergency shelter and other essential aid items to communities impacted by Tropical Storm Urduja. Through the Rotary-ShelterBox project partnership for disaster relief, volunteers from both organizations have formed strong collaborations with many Rotarians around the world volunteering with and supporting ShelterBox’s relief efforts.

Stories From The Field
Blog at WordPress.com.