Shelterbox recently returned to Nepal to evaluate its response to the 2015 earthquakes. The team was led by ShelterBox Australia General Manager, Mike Greenslade with the evaluation conducted by Response Team volunteer, Jo Reid (UK) and Head of Training and Development, Nicky Richardson (UK). The team visited sites where ShelterBox aid was distributed, to conduct interviews with beneficiaries and gain a better understanding of the impact the aid we distribute has on affected families.

Bel Bohadur Sapkota is a subsistence farmer from the hillside village of Pipaldanda, in the Sindhupalchowk district, east of Kathmandu. He was inside his house when a devastating 7.2 magnitude earthquake struck Nepal on 25th April 2015. Luckily for Bel, his wife and 3 children were not with him in the house as the walls and ceiling fell in around him. Outside, his twelve year-old daughter held his baby son in her arms as the earth shook for two minutes. Thinking that he would surely die, he lay trapped in the rubble for 3 hrs before being rescued by friends. Bel was lucky to escape with his life. Many others in Pipaldanda were not so lucky. The earthquake left several dead and many more injured as every house was either completely destroyed or critically damaged.

Bel spent two days in hospital, as his wife and children shared a communal shelter with a hundred others. After two weeks, his family received a UN-spec tent from ShelterBox. Working in conjunction with the Nepal Red Cross Society (NRCS), ShelterBox distributed 384 UN-spec tents in Pipaldanda, one for each family.

“It was very marvellous (to receive the tent) as no other help was there. We feel safe in the tent, there have been many aftershocks and I am concerned for my family”.

Bel Bohadur Sapkota (34yrs) received an IRFC tent from ShelterBox in conjunction with the NRCS following the earthquake. ©ShelterBox/Mike Greenslade

So concerned is Bel after his lucky escape that he has taken out a Rs 6 million loan (around US$6,000) to construct a concrete and brick house, built to government specifications. Whilst government grants may be forthcoming in the future, Bel has taken a big financial risk to protect his family. With no salary to repay the loan he may have to sell some the land he farms to service the loan. Tellingly, Bel’s is the only new house under construction in the village at present.

Elsewhere, in Sindhupalchowk District, ShelterBox worked with the NRCS to distribute Shelter Repair Kits. Each kit consists of 2 6 x 4m reinforced tarpaulins and a tool kit that includes a shovel, hoe, hammer, saw, pliers and tin snips, 15m of nylon rope, tie wire and a variety of nails. The kits enable families to construct temporary shelters or repair damaged homes.

Lab Bahadu Khadka (60yrs) is a retired government employee from the rural village of Yamuna Danda. Lab’s house was a traditional 3-storey house built from stone, mud and timber. It was completely destroyed by the earthquake. Utilising elements of the Shelter Kit, Lab has constructed a variety of shelters to house his family, store food and protect his livestock. Lab said,

“The items were very useful in clearing rubble and building the shelters along with materials what I could save from my old house”.

Lab is using his savings to fund building a single-storey transitional shelter, with a low, stone and mud wall and a wooden frame. The window frames are recycled from his old house and the timber milled from the family’s own trees. The house will be finished before the monsoon season arrives and will provide a safe dwelling for his elderly mother. In the future, when finance permits, Lab plans to build an earthquake-proof house. The memory of last April’s disaster looms large in everyone’s mind. 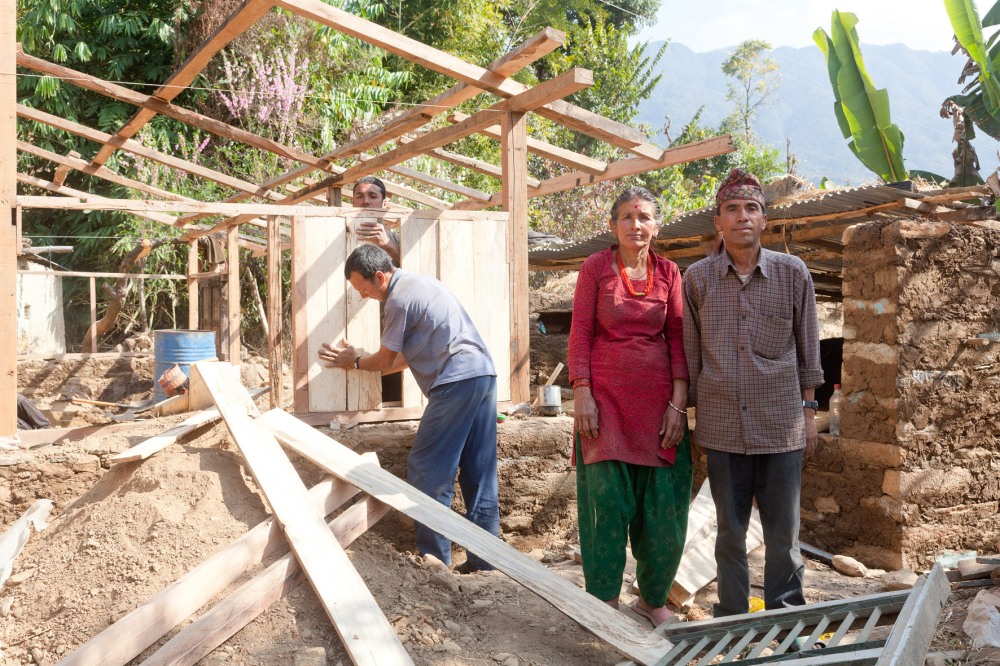 Lab Bahadu Khadka (60 yrs) and his wife are using their saving to build a transitional shelter, primarily for his elderly mother. ©ShelterBox/Mike Greenslade

Eight months after Super Typhoon Bopha hit the Philippines, ShelterBox staff returned to Mindinao. This time it was to meet with community leaders and beneficiaries themselves to discuss the real impact ShelterBox and its donors had on their lives.


As always, a big thank you to all of our supporters who help us make a difference to families displaced by disaster. Without you, our disaster relief work would not be possible. Thank you.
Loading Comments...