Relief supplies have begun trickling into tsunami-hit communities in the Solomon Islands, as another powerful aftershock rattled the Pacific nation in the wake of last week’s 8.0-magnitude earthquake.
The New Zealand  High Commissioner Mark Ramsden announced yesterday that “New Zealand is committed to helping a friend and neighbour at a time of need,” Mr Ramsden said.

“These supplies, many of which have been generously donated by New Zealand businesses, will go some way to meeting the needs of people on Santa Cruz who have lost almost everything in the tsunami.”

ShelterBox SRT’s Lyndon Tamblyn and Owen Smith both from New Zealand are now on the ground in Honiara working with our partner World Vision and local Rotarians to get their much needed supplies to families in need.

The aid supplies which include ShelterBox tents, blankets, sanitation kits, tarpaulins and water containers have been donated to World Vision by The Warehouse and ShelterBox, and chainsaw packs provided by the New Zealand Government have today been unloaded from the Royal New Zealand AirForce Boeing 757 in Honiara and transferred to the cargo boat M.V. Arnavona which will depart for Santa Cruz this evening.

The number of aftershocks had slowed but not halted aid operations in the remote Santa Cruz islands, where at least 10 people died in the tsunami, triggered by the quake last Wednesday.

The Solomon Islands government has declared the Santa Cruz Islands a disaster area. Aerial surveys indicate most of the damage is confined to the Lata region.

Almost 600 houses are believed to have been destroyed, with most of the destruction caused in the initial earthquake and the metre-high tsunami which swept through coastal areas soon after, leaving more than 3,000 people homeless.

ShelterBox Australia is working closely with it’s New Zealand counterparts and the Rotary Club of Suva East to coordinate a response to the heavy flooding that has hit the South Pacific Islands of Fiji. A ShelterBox Response Team, comprising, Lyndon Tamblyn (NZ) and Sallie Fletcher (NZ) will fly out to assess needs and facilitate the importation and distribution of emergency aid. 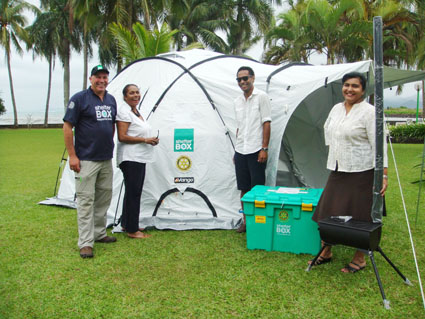 With a state of emergency declared in the West of the island nation, some 12,000 people are currently housed in evacuation centres, and nearly 3,000 households affected thus far. Although the rains eased over the weekend, the threat posed by the approaching Cyclone Daphne gives cause for grave concern.

“We are consulting with several key players, including Rotary in Suva, DISMAC (Fijian disaster management), The Red Cross and the New Zealand Government to coordinate an appropriate and rapid response.