ShelterBox response team members are helped to transport ShelterBoxes over a large river in Malawi by boat, rather than risk the fragile bridge. (ShelterBox/Rebecca Swist)

As the rain continues to fall and the floodwaters keep rising in Southern Malawi, ShelterBox response teams have been working hard to deliver vital aid to communities that have lost their homes, despite various challenges.
Since mid-January, Malawi has been facing some of the worst flooding in 40 years, which has left more than 230,000 people without homes and destroyed countless farms and livelihoods.
Response volunteer Liz Odell is part of a team working in the Malawian district of Zomba, where they’ve faced several challenges reaching remote communities near Lake Chilwa.
In this video, she describes how flash flooding, impassible roads and washed-away bridges mean that the teams have had to find alternative methods to transport ShelterBoxes to families in need of shelter.
Despite such difficulties, the teams are continuing to provide aid in Zomba and Chikwawa – another heavily flooded district. So far, we have been able to deliver ShelterBoxes to almost 400 families.
In addition to our specifically designed tents, the boxes also contain mosquito nets and water purification units that will help to prevent diseases such as malaria and cholera, which thrive in areas affected by flooding.

When ShelterBox response team members Johnny O’Shea (UK) and Sallie Buck (UK) arrived in Malawi last month, their role was to get a clear picture of the devastation caused by flooding in the south of the country and to identify the areas where people were most in need of shelter
The flooding, which is thought to be the worst in 40 years, has already displaced more than 230,000 people and has left many communities inaccessible.
This video shows Sallie and Johnny’s journey through the country to see the true extent of the flooding, where they encounter overcrowded camps as well as schools being used as emergency shelters.
​

Three ShelterBox response teams are currently in the process of distributing aid to people in the districts of Chikwawa, Zomba and Phalombe. Experienced Australian SRT member, Peter Pearce has flown out to lead one of the teams on the ground. 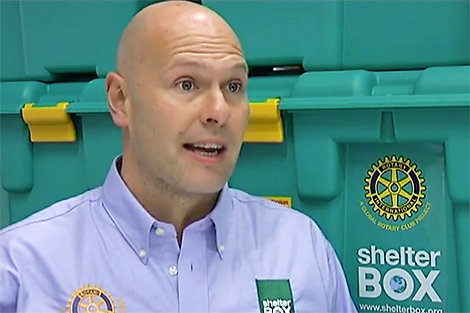 Dave Ray, ShelterBox Operations Coordinator, is currently working in Malawi as Deputy Cluster Coordinator for a cluster group formed to help manage the response to widespread flooding in Malawi.
Torrential rain continues to fall in Malawi as it suffers from the worst floods in 40 years and current reports suggest that more than 230,000 people have had to leave their homes as a result.
During such large-scale disasters, agencies come together to form cluster groups, so that they can coordinate their response and work towards common objectives within a particular sector of emergency response, such as health, food or shelter. Cluster groups are not only formed to coordinate a national response, but are often used as a way to work efficiently at a local level too.
Dave is working to coordinate the shelter cluster within the areas affected by flooding in Southern Malawi. This cluster is working to assist the Malawi Red Cross in its role as co-Chair of the national shelter cluster.
He explained why working in a cluster is so important: ‘Creating a cluster group gives agencies, such as ShelterBox, the space and opportunity to work together to provide a coordinated response.
‘The members of a cluster group use their experience and overall knowledge of a disaster to steer organisations towards an agreed way of working and can help set standards that everyone has to work to.
‘As part of a cluster, our main role is to support agencies so that they can give the best possible aid to those people in need of shelter.’
Coordination and communication are key
Dave is currently situated in the south of the country, where he is helping to coordinate responses in the districts of Nsanje, Zomba, Phalombe, Chikwawa, and Blantyre.
Each day includes a lot of travelling, as he is helping to set up and support cluster groups in each of the districts to make sure that aid agencies and local groups are coordinating, rather than overlapping or conflicting with each other.
Dave also spends a lot of time visiting the temporary camps that have sprung up throughout Southern Malawi, so that he can report back to the central cluster based in the capital of Lilongwe and flag up any issues or gaps in the provision of aid that need filling.
He said: ‘It’s really important to stay informed, as things can change so quickly following such a massive disaster.
‘For example, we’ve recently found that there appears to be a difference between the number of people staying in displacement camps over night to the amount that have been registered. It’s possible that some people have registered to the camps so that they can receive food, but that they are returning to flooded and unsafe villages or staying in overcrowded host communities.
‘Having a full and up-to-date picture of the situation helps to reach all of the people who need shelter’
A greater insight into the shelter sector
Dave completed the training to become a shelter cluster coordinator last July, after the role was recommended to him by a member of the International Federation of the Red Cross and Red Crescent (IFRC) – the organisation that convenes shelter clusters after natural disasters.
Dave’s role in the shelter cluster has been fully supported by ShelterBox, as his experience is providing an invaluable insight into the shelter sector and will help to inform how ShelterBox works in the future.
He said: ‘Being able to see how a shelter cluster works from the inside is invaluable, as I’ve been able to learn more about how agreed standards of working are set and the different processes of different organisations, as well as their capacity to help in terms of money and resources.
‘I can also see more clearly how different sectors and situations can overlap, as well as how conflicts between organisations could happen. For example, people using schools as shelters has implications for organisations who are trying to focus on education, as well as those whose main objective is to provide shelter
‘Most importantly, by working within the cluster, I’ve been able to get a wider, overall view of the situation and have learnt how politics come into play when responding to a disaster, as well as the wider impact of different approaches to providing aid.’
Gathering respect in the shelter community
‘This knowledge can really help to inform ShelterBox’s decision-making in the future, so that we can provide the most appropriate aid in the most appropriate way.
‘Our ShelterBox response team members, who have been working in Malawi for several weeks, are already gathering respect from the wider cluster community for their ability to work with other organisations and to provide the best possible response for people affected by the floods.
‘By also participating in the cluster process, it shows that ShelterBox is looking to have a bigger role in the sector and really understands the importance of engaging with the wider community.’

Large parts of Southern Malawi still remain flooded and thousands of people have lost their homes and possessions. (Johnny O’Shea/ShelterBox)

Throughout the course of a year, the landlocked country of Malawi is regularly hit by floods and droughts, but this year’s deluge is said to be the worst in 40 years as a month’s worth of rain fell in just a day.

A ShelterBox response team, made up of Johnny O’Shea (UK) and Sallie Buck (UK) have flown to Malawi to see how ShelterBox can best help as reports suggest that more than 174,000 people have had to leave their homes and that 638,000 people have been affected in all.

The team has been looking at the need for shelter in several districts in the south of the country, including Chikwawa, where the scale of the damage is only starting to emerge.

Johnny said: ‘We visited the village of Khungubwe, which had been inaccessible by road, and found 2,700 people housed in an emergency centre that only had two rudimentary latrines for all of those people.

‘The people have come from six villages about six kilometres away, which were washed away by the flash floods that happened earlier this month. While they escaped, 24 friends and family members are still missing.’

The team found that many of the people staying in the emergency camp are too scared to return to their villages in case the flooding happens again, but the situation in the camp is not much better as there is little food or clean water and malaria is rife.

In Machenga, 1,679 people, including 92 pregnant women and 175 children under the age of five, are camping out in a school. There is little shelter from the scorching heat and one unreliable bore hole for drinking water.

The third village the team visited was Konzere, where they heard how people climbed onto the roofs of their houses to escape the rising floods. When the waters got too high, they were forced to climb into the trees and cling on as they watched their homes slide away. Some people waited for three days without food or water before being rescued.

For those that have escaped the floodwaters, the nightmare continues.

Johnny said: ‘Many people don’t want to return to their villages as they say that they are too dangerous, but conditions in some of the temporary camps are just as frightening, with reports of crocodile attacks and fatal cases of malaria.’

ShelterBox is coordinating with other aid agencies working in the country to establish the best way of delivering aid. By working together, it means that more people can be reached and will be provided with the most suitable equipment.

ShelterBox is currently looking to send out a mixture of aid, including ShelterBoxes and Shelter repair kits, and will distribute the items depending on need.

You can help by donating here: PLEASE DONATE