ReliefAid chief speaks after one of his Aleppo aid colleagues was killed by a sniper. ShelterBox’s partner charity welcomes ceasefire for Syrian families living in ‘hell on earth’ 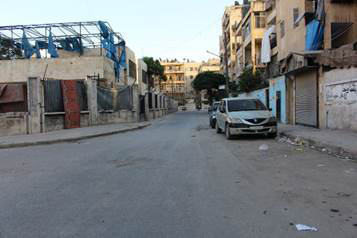 The Al Zubdia neighbourhood of southern Aleppo, near the ReliefAid offices where Karam died

A little over a week ago aid worker Karam died from a sniper’s bullet after working on the roof of his charity’s office in southern Aleppo. Now, with a tense and fragile ceasefire underway, his colleagues are calling on ‘all parties to take up this unique opportunity for peace.’

Executive Director of ReliefAid, Mike Seawright, describes the circumstances of the death of one of his aid team in Aleppo on Sunday 4 September.

‘It was at our ReliefAid office in Al Zubdia neighbourhood. Karam was part of our team for the last year, conducting our neighbourhood aid distributions. After our previous office had been wrecked during an air strike he was fixing the water tank on the roof of the new office when he was shot by a sniper. Karam was rushed to the local hospital where he underwent six hours of surgery, unfortunately succumbing to his injuries. His family and our team buried him the next day in a local neighbourhood garden.’

Karam (name changed for security reasons) leaves a wife and three daughters in East Aleppo (2, 7 and 10 years old), two sons in Lebanon (20 and 18 years old). He also had family in West Aleppo, and was a citizen of Aleppo city.

Mike Seawright adds, ‘The local neighbourhood gardens used to be places where children play. Now they are graveyards, filled by the very community to whom they used to bring solace and tranquillity.’

‘Delivering aid in war zones presents many challenges, and while we accept the risks associated with this work it is a complete shock to us when we lose one of our own. Karam’s humanitarian ethos and efforts supported the delivery of life-saving support to over 24,000 people living in East Aleppo, the most war torn city in the world. He represented the very best of Syria, where communities help communities, families help families, and Syrians irrespective of background help one another.’

‘Inspiringly while the death of our friend and work mate has saddened us, and our teams are aware of the risks they face, unanimously and without pause they are continuing our life-saving work. While we face many challenges delivering war zone aid, I am constantly motivated by a team that, even in the face of personal danger and loss, continue to support their communities. Families experience acute needs within the city, and our teams stand ready to assist those in dire need.’

A nationwide ceasefire in Syria, brokered by the United States and Russia, came into effect on Monday evening, with aid agencies preparing to send food and medical supplies to besieged Aleppo. Turkish sources said over thirty aid trucks, under UN supervision, were ready to deliver humanitarian supplies to the city.

‘In a war which is targeting civilians and humanitarian workers on a daily basis we welcome the recent cessation of hostilities. If held, the ‘cease-fire’ will have a positive impact on over one million people living in Aleppo City. On behalf of Syrian families living in what can only be described as ‘hell on earth’ we call on all parties to take up this unique opportunity for peace.’

‘He was so kind to me, he would take me to his house to eat cooked food as I am single and don’t know how to cook.’

‘We lose friends every day. This is not the first time but we are feeling so bad. There is no escape, this is our life.’

‘I want only one thing, I want to die in dignity on my ground. I can’t see any more children die in bad ways as the world sits idly by watching.’

ShelterBox has worked with New Zealand-based ReliefAid over a long period, and most recently provided 4,000 aid packages to families in Aleppo. The kits provided are a mix of essentials including water purification equipment, jerry cans, mats, solar lamps, tarpaulins, mosquito nets and kitchen sets.