‘As we were driving I saw miles and miles of people lined up on both sides of the road holding cardboard signs asking for donations of anything like food or water, eyes desperate and scared. I have never seen anything like it on previous deployments.’

ShelterBox Response Team (SRT) member John Cordell (US) describes his journey to Compostela Valley in Davao Oriental province, Philippines, one of the worst hit areas by super Typhoon Bopha on the island of Mindanao. He is part of a three-person team who has been assessing the need in the region.

Almost a quarter of the 4.1 million people affected by the destructive storm are in Compostela Valley, also known as Camval, with ninety per cent of the 7,200 totally destroyed homes being here. Out of the 800 people still missing, 500 are in Camval. Buildings have been washed away or buried by flash floods and mudslides. Food and water is scarce.

‘We have been told that Bopha is the worst storm this area has ever seen,’ said John.

ShelterBox has aid pre-positioned in the Philippines (this is our 12th deployment to the disaster-prone country). SRT’s from ShelterBox Philippines responded immediately.

An intense typhoon has carved a path of destruction through the Philippines leaving many families in desperate need of emergency shelter. A ShelterBox Response Team (SRT) is being mobilised to respond.

Typhoon Bopha struck northern Palawan with winds of 120 kilometres per hour and gusts of up to 150 kilometres per hour. Coastal, farming and mining regions were affected by the typhoon with Compostela Valley province, in eastern Mindanao, thought to have been the hardest-hit area. It is estimated that around 70 per cent of the region’s agricultural land has been damaged.

Many regions remain isolated due to power outages, lack of communications and damaged roads and bridges. Thousands of people are reported to be in need of temporary shelter having lost their homes to the typhoon.

SRT member Sonny Ongkiko (PH) has responded to several tropical storms in the region before. He will join SRT members from overseas and local Rotarians to assess the need for emergency shelter. 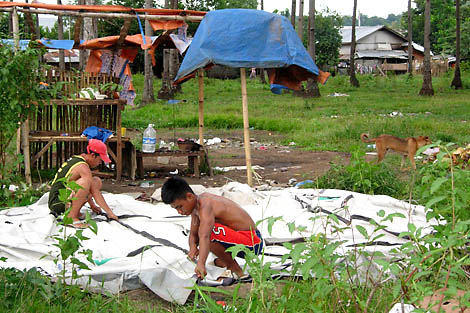 ShelterBox tent beneficiary Evangeline de la Peña with her children packing up her tent to take with them to their newly built home, the Philippines, August 2012.

Last week, eight months after Typhoon Washi, a ShelterBox Response Team (SRT) returned to Mindanao in the Philippines to find out what had happened to the families who had lost everything.

‘Just the day before, I was near the capital Manila seeing families made homeless by the recent floods move into ShelterBox tents, so I was eager to hear the experiences of families in Mindanao who had lived in the tents and moved out.

‘When we arrived in Cagayan de Oro, it was hard to imagine the destruction that the typhoon had caused. The city was getting ready for a festival, shops were open, and the streets were busy and all around were signs of construction.

‘We heard that there were still some families living in ShelterBox tents, but the first camp location we went to was empty as the families had recently transferred to more permanent shelters.

‘The next site we travelled to at Calaalan was full of activity as the land was being used to build permanent houses. Further in the distance we could see the familiar white domes of ShelterBox tents dotted around what had once been a busy camp of more than 200.