The flooded Paraná River, which runs through Brazil, Paraguay and Argentina, has displaced hundreds of thousands of people. (Derek Locke / ShelterBox)

The scenes of devastation in Paraguay go on and on, as our ShelterBox response teams assess the need for shelter following the worst floods in 50 years. In some places this means the waters lap over flood defences built nine metres above the usual water level.
The floods, which have forced 130,000 people from their homes in the Paraguayan capital of Asuncion and the surrounding areas, have been caused by heavy El Niño rains. El Niño is a climate phenomenon that creates complex changes in weather patterns, from droughts in Australia and the Pacific, to intense rainfall across South America.

ShelterBox is working with the Paraguayan Red Cross to carry out assessments and distribute aid.

An initial shipment of 2,000 shelter kits is on its way from prepositioned stores in Panama. These shelter kits contain heavy-duty tarpaulins and tools that can be used to create emergency structures and repair damaged buildings.

ShelterBox last provided aid in Paraguay to communities deluged by floods in 2014. Shelter kits proved to be vital lifelines for many people, such as Cinecia Valdes.

Cinecia Valdes, who received a shelter kit from ShelterBox, talks about her experience of flooding in 2014.

We revisited 72 year-old Cinecia, who lives with her young grandchild, two months after she received a shelter kit. Before receiving the kit, she had spent several days sleeping in the street before moving to a flimsy and overcrowded emergency shelter.
However, once armed with the tools and materials included in the shelter kit, two of Cinecia’s sons were able to help repair her home once the floodwaters had receded. They used all of the tools to make the repairs and fixed a tarpaulin over her roof. This not only made the house waterproof, but provided an overhang that created shade and protection from the rain.

Cinecia told us that she was very happy with the repairs made to the house: ‘I was very satisfied with the shelter kit – it contained the things we needed.

‘It is much more tranquil at home than at the emergency shelter. It is better for me, as I have diabetes and high blood pressure.’

Our current teams in Paraguay are working hard to find families in need and give them the same tools we gave Cinecia, so that they too can feel peace and safety once more.

Your support means that we can continue to send teams of ShelterBox volunteers and more aid to places like Paraguay – please donate today. 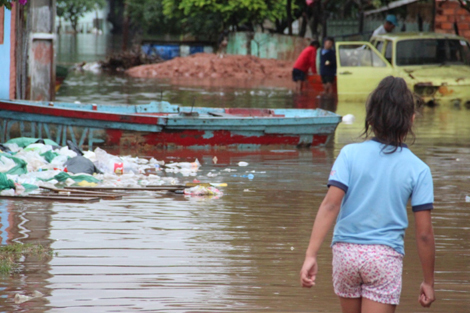 Paraguay 26 June 2014. Piles of garbage and inadequate sanitation facilities add to the misery of families driven from their homes by weeks of torrential rain, which has led to the Paraguay and Parana Rivers bursting their banks. (Paraguay Red Cross).

As sports fans watched the World Cup final last week they’d be forgiven for not knowing that away from the perfect conditions of the Estadio do Maracana, large swathes of Brazil, Argentina and Paraguay had been suffering from heavy rain storms and resulting flooding for much of June and July. These deluges displaced enough people to fill the Maracana stadium almost three times over, yet they have barely registered on international news.

In Paraguay rainstorms began back in May causing rivers to overflow, particularly in the southwest of the country. By 12 June, as the first matches of the World Cup began in neighbouring Brazil, almost 160,000 people were feared to have been affected. Current estimates suggest that as many as 200,000 people have now been affected by the flooding in six different provinces. Similar scenes have also been witnessed in neighbouring Brazil and Argentina, but despite the intense media focus drawn by the World Cup these dramatic events were largely overlooked.

In June of this year ShelterBox sent a team to carry out assessments of the situation and to establish whether we could be of assistance to aid efforts. At the time the ShelterBox team encountered evacuation centres full to capacity, with further rain forecast.

Paraguay 9 July 2014. Estelvina Gonzales, mother of three, is one of 15 people living in a church along the embankments of Asunción. The roof of Estelvina’s house can be seen behind her at the end of what was once a street. The water has reached the foundations of the church. When asked where her and her children will go, Estelvina told us that she did not know. (Liz Odell/ShelterBox).

Continuing our commitment to assisting the region, ShelterBox currently has a response team in country including Todd Finklestone (US), Derek Locke (US) and Agnes Leder (DE). Although the rainstorms have since subsided the need for displaced families to be sheltered remains, and the ShelterBox response team is currently working with partner agencies that will assist in distributing aid early next week.

Thanks to the support of our donors, a shipment of shelter repair kits and other vital aid is due to arrive in Asuncion today to be distributed by the ShelterBox team and Paraguay Red Cross. The ShelterBox response team is also conducting assessments in nearby Argentina, working with local Rotary groups in the country. Over-crowded evacuation centres have become a reality for families affected by the flooding in Argentina too and so the ShelterBox team is looking into the viability of transporting and distributing aid alongside the ongoing operations in Paraguay.

Although responding to flooding across multiple countries within one region has caused logistical challenges, ShelterBox is committed to assisting the affected families and continues to try to find ways to deliver aid, in collaboration with other organisations, across Paraguay and Argentina.

You can donate here: PLEASE DONATE 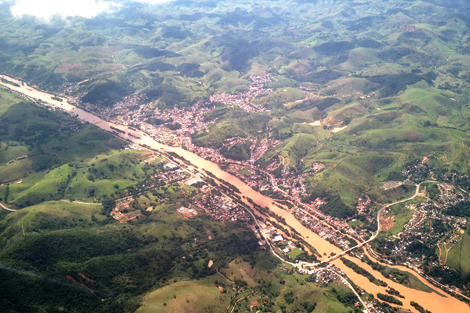 BRAZIL. 15 JANUARY 2012. Even though this is ShelterBox’s first response to a disaster in Paraguay, it has responded many times to crises in other countries in the region including Peru, Bolivia, Chile and Brazil, which is pictured here. (David Hatcher/ShelterBox)

ShelterBox is sending a team in response to torrential rains that have caused flooding in the southwestern region of Paraguay, including in and around the capital Asunción.
Reports say that over 200,000 people are affected across six different provinces. Over 70,000 are without homes in Asunción; many are sleeping in makeshift shelters.
Further heavy rainfalls are expected for the coming weeks until the end of July, leaving the flow levels of the Paraná and Paraguay rivers high at least throughout the rest of June that will prolong the displacement of families.
Response team members Liz Odell and Todd Finklestone arrive in the Latin American country on Tuesday to carry out shelter needs assessments.
‘Evacuation centres full’
‘This is the first time we have worked in Paraguay so we are breaking new ground,’ said Liz. ‘We are initially collaborating with the Paraguayan Red Cross and Pastoral Social Arquidiocesana to assess the need for emergency shelter along the banks of the Paraguay river.’
‘Many people are staying in evacuation centres, which are now full, so we will be going to the most vulnerable areas where many families remain displaced to see how ShelterBox can assist them,’ added Todd.
The rains have also destroyed crops and blocked roads. The team will do all it can to support the communities in desperate need.
Loading Comments...